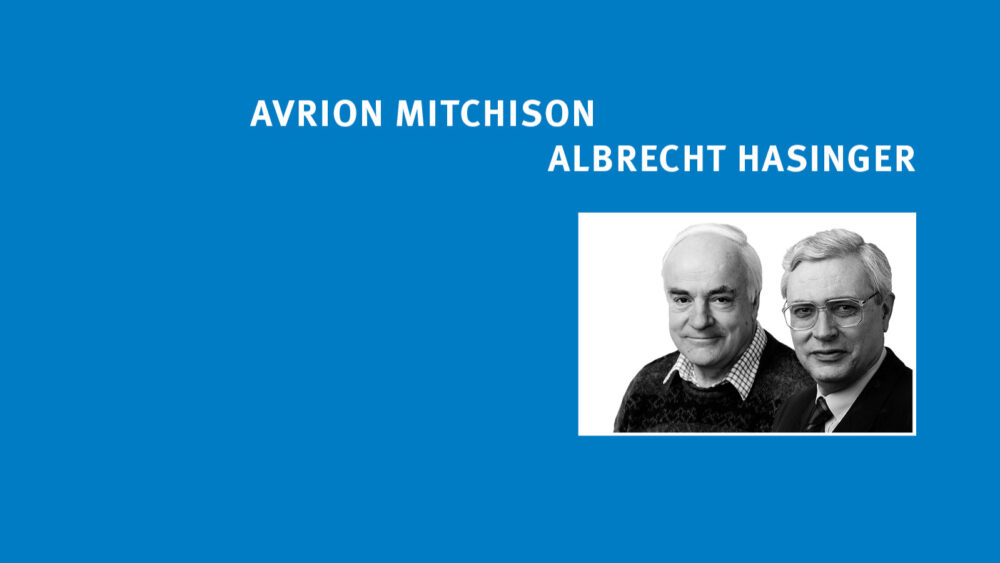 Two great men still shape the image of the DRFZ

In honor of its Founding Director, Avrion Mitchison, the DRFZ annually awards the Avrion Mitchison Prize to young scientists contributing significantly to understanding and treating rheumatic diseases. Donated by the Ernst Schering Foundation until 2018, the prize is now awarded by the DRFZ. The prize is endowed with 3,000 euros.

Creative ldeas and elegant experiments not only make the scientist's work exciting, but they are also the essential logical starting point for advances in the treatment and prevention of disease.

Avrion Mitchison from London became the first scientific director of the DRFZ in 1989. During a time of changes in the early years of German reunification, he helped the newly founded DRFZ to gain international prominence. As an internationally recognized expert in immunological tolerance, immune regulation and immunogenetics, he established the research field of immunology of rheumatic diseases.

As a PhD student, Avrion Mitchison studied how immune cells behave during transplantation. He showed that immune cells with antibody-like properties, rather than antibodies themselves, are responsible for transplant rejection. He thus identified the cellular basis of the immune system’s violent reaction against transplant antigens – a major problem in organ transplantation.

Soon after, the cooperation of antibody-producing B lymphocytes and T lymphocytes, which mediate cellular immunity, was described. Mitchison showed that the immune system can respond to different amounts of a foreign antigen – e.g. an infection or a transplant – with positive, i.e. eliminating and rejecting, or with negative, i.e. suppressing immune reactions. He recognized that B and T lymphocytes have different structures, so-called haptens and carriers, on the antigens foreign to them.

In chronic inflammatory diseases such as rheumatoid arthritis, it is precisely these reactions of the immune system that are directed against the body’s own structures. Mitchison thus brought decisive experience in researching rheumatic diseases to the DRFZ. In a completely new approach at the time, he transferred findings on the immune system’s handling of pathogens to the mechanisms underlying rheumatic inflammation. He thus defined the goal of research at the DRFZ: the development of novel, preferably curative therapies by eliminating the causative dysregulations of the immune system.

Avrion Mitchison is considered one of the fathers of modern immunology.

Avrion Mitchison (*1928) studied zoology at Oxford University, where he received his doctorate in 1952 under the supervision of Sir Peter B. Medawar, who later won the Nobel Prize. After a research stay in the USA, he headed a research group at the National Institute for Medical Research in London and was Jodrell Professor of Zoology and Comparative Anatomy at University College London from 1971 to 1991.

In 1989, Avrion Mitchison accepted the appointment as the first Scientific Director of the DRFZ Berlin.

After his retirement at the end of 1996, Avrion Mitchison went back to the Medical School of University College in London. Today he is Professor Emeritus there and lives in London.

Chronicle of the Avrion Mitchison Prize

Albrecht Hasinger was one of the founding fathers of the DRFZ. Already in the beginning of the 1980s, as Berlin State Secretary for Health, he promoted the establishment of a center for rheumatic diseases research. Finally the German Rheumatism Research Center was founded in 1988.

The Albrecht Hasinger Lecture was initiated after the death of Albrecht Hasinger in 1994 by Gerd-Rüdiger Burmester, Head of Rheumatology at Charité-Universitätsmedizin Berlin, and is intended to commemorate his contributions to rheumatology: every year, a renowned international scientist is invited to Berlin to give a lecture on this occasion.

Who was Albrecht Hasinger?

Albrecht Hasinger (1935 – 94) studied law in Munich and Freiburg and worked in the Bavarian State Ministry of Finance until 1967. He then moved to Bonn and was a research assistant in the CDU/CSU parliamentary group until 1969.

Albrecht Hasinger was already interested in social issues in the 1970s. From 1974 to 1977, he was chief executive of the CDU social committees. In the legislative period from 1976 to 1980, he was a member of the German Bundestag.

In 1981, he was appointed State Secretary to the Senator for Health and Social Affairs in Berlin by the then Governing Mayor Richard von Weizsäcker.

In the early 1980s, the Gesellschaft zur Erforschung rheumatischer Erkrankungen – Forschungszentrum Berlin e. V. discussed the poor situation of rheumatology in Germany with Albrecht Hasinger in his capacity as State Secretary for Health.

Subsequently, renowned physicians and scientists such as Hans Kröger, Raimund Frankl, Helmut Mischke, Jochen Kalden, Fritz Melchers and Pastor Elimar Brandt, in cooperation with Albrecht Hasinger, paved the way for the establishment of a center for research into rheumatic diseases. The mayor of Berlin at the time, Eberhard Diepgen, announced in 1985 that the city of Berlin would establish just such a center.

After long negotiations, the Foundation German Rheumatism Research Center Berlin (DRFZ) was founded in 1988. The sponsors were the state of Berlin and Immanuel-Krankenhaus GmbH.

With the election results of 1989 after the fall of the Berlin Wall, a changed political constellation emerged. Albrecht Hasinger was therefore unable to continue his work at the Senator for Health and Social Affairs. But thanks to his energetic preparatory work, the German Rheumatism Research Center Berlin (DRFZ) was able to begin its work in 1990.

Albrecht Hasinger became the first president of the of the Board of Trustees of the DRFZ.

Chronicle of the Albrecht Hasinger Lecture 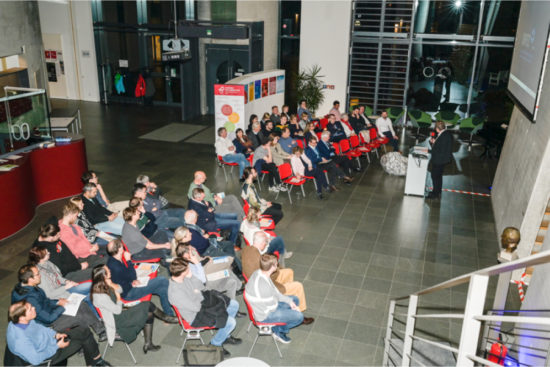 Audience of the lecture 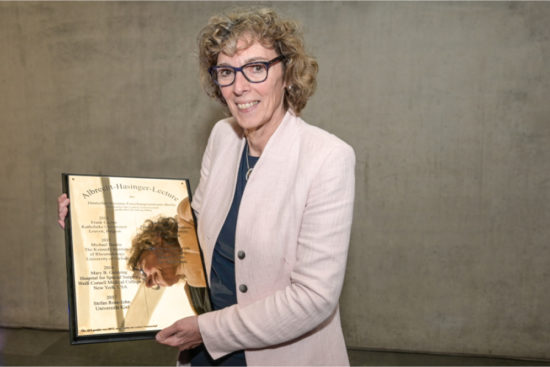 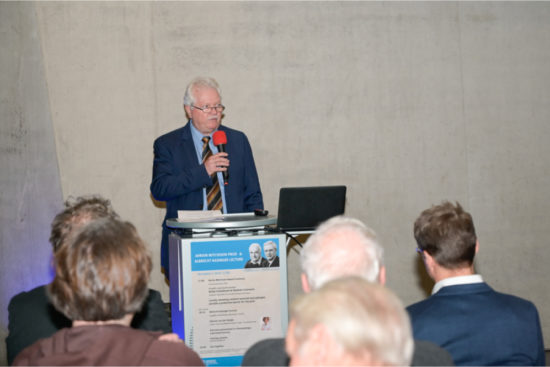 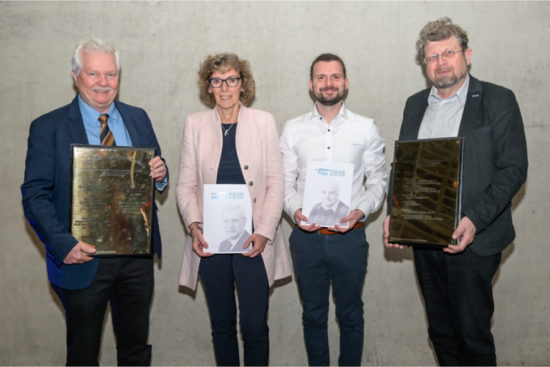 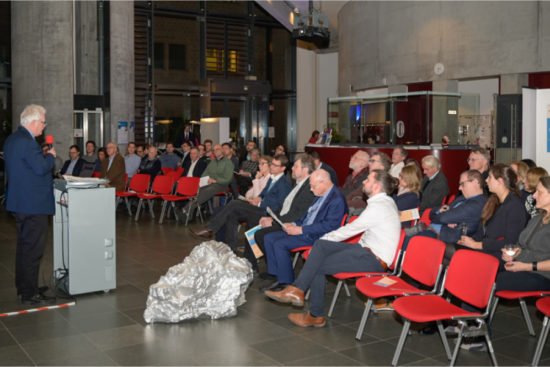 Event in the DRFZ lobby 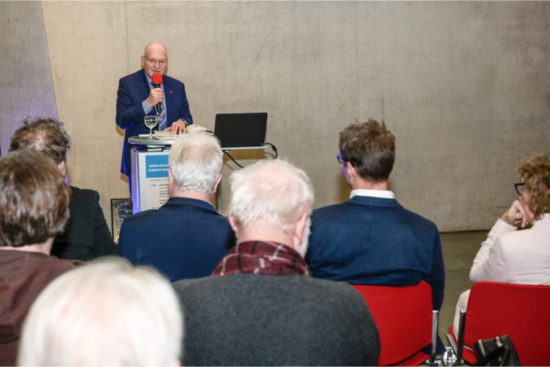 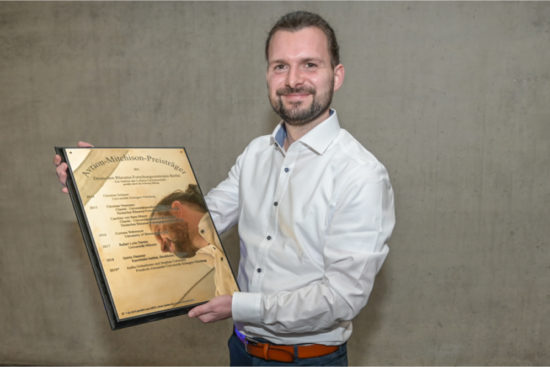