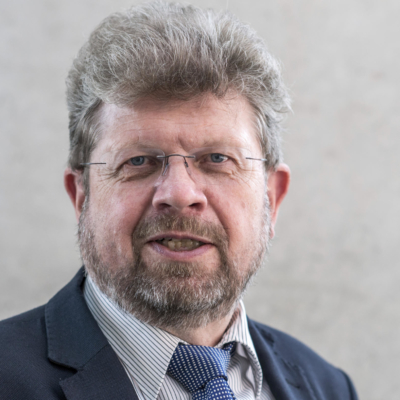 His scientific carrier began with his biological studies at the universities of Bonn and Cologne, at first focussing on the isolation of antibody class switch variants and idiopathic variants of hybridoma cell lines as well as the underlying molecular mechanisms of somatic mutation. Subsequently, he was the first to prove on activated B cells that in vivo antibody class switch is carried out by the physiological mechanism of recombination. Andreas Radbruch was able to show that the class switch induced by recombination is controlled by certain cytokines and is directed at certain classes.
Since his move to the DRFZ, Andreas Radbruch has been dealing with the regulation of the antibody class switch, precisely the regulation of the antibody function by cytokines secreted by T lymphocytes. This class switch is an essential element of the immune reaction and also plays a decisive role in the development and molecular imprint of the immunological memory, one of the four current main research subjects of Andreas Radbruch. His further main research subjects are autoimmunity, inflammation and immune pathology, the biology of T and B lymphocytes as well as plasma cells and the development of immune technologies such as cytometry and cell sorting.
In their research, the DRFZ scientists around Andreas Radbruch combine advanced genetic methods in mice with cell-biological methods as well as system-biological approaches in order to decode the individual regulation variables and their interaction in the complex network of messengers and immune cells. A milestone in the research of the last few years was constituted by verifying that plasma cells in the medulla are extremely long-lived, contrary to what has long been postulated. Cytokines are also important in this respect: they keep the cells alive.
In addition, Andreas Radbruch maintains close cooperation with spin-off, independent biotechnological enterprises, in which the cell sorting and transfection technologies developed within the scope of the research projects are refined, and numerous clinics, in which these technologies are applied in the clinical research.
Andreas Radbruch has been author and/or co-author of more than 200 original publications and more than 90 reviews. He is holder of patents and patents pending and has received a great number of fellowships and awards, amongst others an Advanced Grant of the European Research Council (ERC).
Currently, Andreas Radbruch is spokesperson of the Section C (Life Sciences) of the Leibniz Association, president of the European Federation of Immunological Societies (EFIS) and Deputy Chairman of the Robert-Koch-Stiftung.