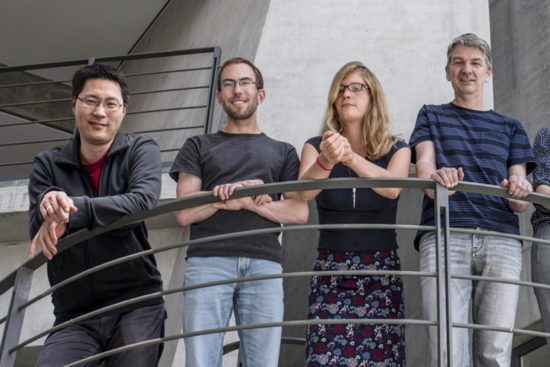 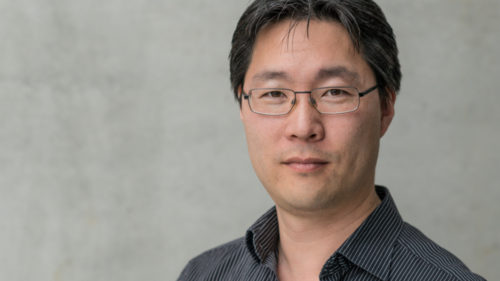 In cooperation with the Berlin based company A.P.E. we developed quantiFlash. QuantiFlash is a LED based light source for scale calibration. This tool allows quantitative comparison of flow cytometers.

We introduced an experimental strategy, in which discontinuous emission spectra were acquired and analyzed by principal component analysis (PCA). In a proof-of-principle study we could show, that the simultaneous detection of up to 4 fluorochromes, which were all excited by a 488 nm Argon-laser could be resolved by the detection of a discontinuous emission spectrum. In other words we use a standard cytometer just by changing the optical filters as a multispectral cytometer. No further expensive modifications as described in the literature are required. For simplifying data processing, PCA algorithm have to be implemented in standard flow cytometry software. Altogether, our studies demonstrated for the first time new possibilities in combining fluorochromes with similar emission spectra.

We have developed a flow through reactor, which sterilizes the sheath fluid at the point of use. The flow through reactor is comprised of a 35 LED array positioned on top of three concentrix channels through which the sheath fluid passes. We use Galliumnitrid (GaN) based UV-C (220-290 nm) LEDs, which have attracted increasing interest as novel UV-C radiation sources for applications in water purification and desinfection.
Compared to conventional gas-discharge lamps, UV-C LEDs have a compact form factor, operate at very low DC voltages, exhibit fast on/off switching capabilities, and their emission wavelength can be tailored to the optimum wavelength for germicidal effectiveness. We have installed the module in a FACS Diva cell sorter and have connected it to the sheath fluid tubing close to the nozzle. At a sheath pressure of 30 psi, we were able to reduce the number of microorganisms up to 1000-fold.
The cell sorter remained free of microorganisms for at least 7 days after the sterilization with bleach was performed. 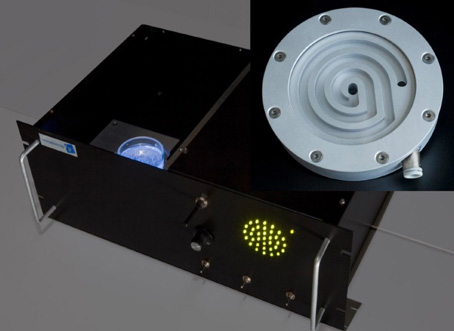 Device to cool the sheath fluid on a FACS Aria

We developed a cooling device in order to keep the sheath fluid temperature on a FACS Aria constant. We found that the foccusing of the side-streams on a FACS Aria are temperature sensitve. Room and instrument temperature shifts of more than +/- 5K results in a defocusing of the side-streams and the recovery of sorted cells decreased drastically. Furthermore, the sensitivity of delayed lasers decreased due to instable laser-delay.
To overcome this effects we hold the sheath-fluid constant at 17°C by using our device. 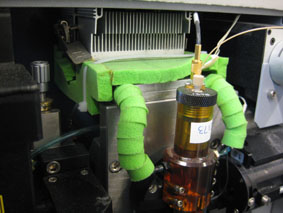 During long-term sorts cells often sediment at the bottom of the sample tube. In consequence, the threshold rate are instable or interupted and cells in the settlement are exposed to cytotoxin. In cooperation with Advalytix we modified their universal acoustic mixing platform “SAWStation4” so that we can implement it in a FACS Aria.
In our study we could show that the yield of sorted cells was about 5% higher compare to cells mixed by the original FACS Aria agitator. Moreover, we found less dead cells in sorted populations. 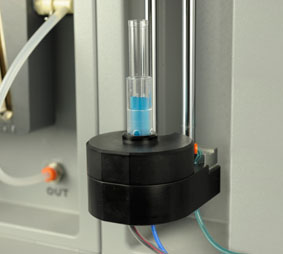 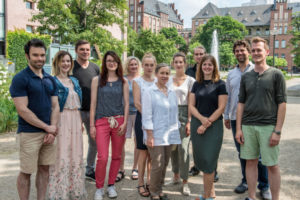 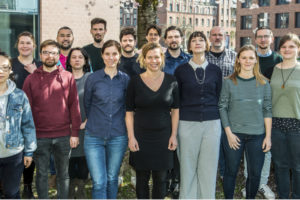