Approximately 10% of the German population suffer from a chronic inflammatory disease such as arthritis, psoriasis or inflammatory bowel disease. In these patients, the composition of the intestinal flora is different from that of healthy people. On the one hand, our intestinal microflora protects us from the penetration of pathogens that cause illness. However, on the other hand, the microflora can also be the trigger for chronic, painful and life-threatening diseases if it gets out of balance. Therefore, the intestinal flora is not only a mirror of our health, but it can also influence the clinical course of disease, risk of cancer development and the response to therapy.

What is Microbiota cytometry

We have developed a new method at the DRFZ- microbiota cytometry – which allows for the simple and rapid determination of the composition of intestinal flora from stool samples. Currently we are in the experimental phase to investigate the causal relationship between intestinal bacteria and disease in detail. We hope that in future it will be possible to detect these diseases at an early stage by our method and to specifically treat them.

A reduced diversity of intestinal bacteria increases susceptibility to inflammation.

The composition of the intestinal microflora can also be used for diagnosis and prediction of therapeutic outcome; in Crohn’s disease, one type of bacteria that is known to be anti-inflammatory is greatly reduced. The reduced number of these bacteria may be an indication that there is an increased risk of relapse after completion of therapy e.g. anti-TNF. Ulcerative colitis is also characterized by inflammation on the intestinal surface caused by the interaction of bacteria and their components. In addition, there is an increased concentration of messenger substances of bacterial origin which destroy the protective mucus layer.

How intestinal microflora and the immune system protect us from pathogens

Trillions of bacteria live in our intestine. This intestinal flora, also called microflora or microbiota, helps us to digest food and produce vitamins. Bacteria colonize the intestine during and immediately after birth. Even at this early stage, the immune system has an important influence on the composition of the microbiota, although at this point, the mother’s immune system via breastmilk, still determines which bacteria settle in the newborn’s intestines. Breast milk contains components of the maternal immune system: immunoglobulin A antibodies (IgA) that are taken up by the baby.

Later in life, the baby’s immune system produces its own IgA antibodies and regulates the diversity of the microbiota. IgA antibodies bind directly to bacteria in the intestine and thus prevent the penetration of pathogenic bacteria into the intestinal wall, which could cause inflammation.

IgA antibodies are an important defence against pathogenic bacteria

IgA antibodies are an important defence against pathogenic bacteria. Interestingly, IgA antibodies seem to mainly bind to bacteria that are associated with inflammatory diseases in the intestine. Moreover, it has been shown that pathogenic bacteria proliferate more when IgA is absent. IgA therefore protects against inflammation. Our researchers are investigating which bacterial strains influence IgA production in the intestine and how exactly this happens. We are particularly interested in whether there is a connection between these IgA-promoting bacterial strains and the development of chronic inflammatory bowel diseases such as Crohn’s disease and ulcerative colitis. Based on this knowledge, we want to develop new therapeutic approaches for treating these diseases.

Not only have we have identified bacteria that are more frequent in patients with rheumatic diseases than in healthy people, but we have also found that these bacteria actually promote intestinal inflammation. We are therefore investigating whether IgA antibodies that positively alter the intestinal flora are a potential treatment option for patients with chronic inflammation.

... other diseases in which the intestinal flora is altered

In chronic inflammatory bowel diseases such as Crohn’s disease and ulcerative colitis, which affect more than 3.7 million people in Europe and North America, the composition of the intestinal flora (dysbiosis) is altered compared to healthy people and, most importantly, the diversity of bacteria is lower.

Cancer and even depression also seem to be influenced by intestinal bacteria. For example, in an Irish study, rodents became lethargic and fearful when they had previously been treated with intestinal flora from depressed patients.

We want to identify which bacteria cause disease and which protect us from inflammation. We visualize the differences of the intestinal flora from healthy people and from patients with inflammatory diseases with our self-developed cytometry method. We can isolate specific bacteria from the intestine or stool samples of patients or healthy controls in order to investigate them more precisely, which would enable us to develop specific antibiotics or new concepts for the therapeutic application of bacteria.

Several research groups at the DRFZ are dedicated to working in this research area to improve the future therapeutic potential of using this approach to treat inflammatory disease. 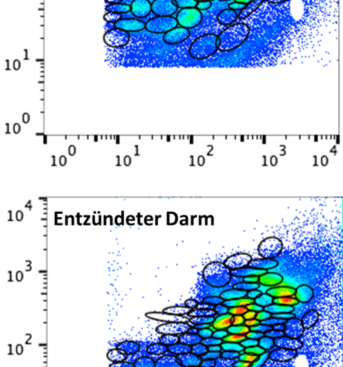 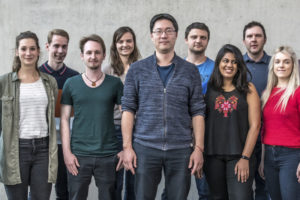 How does the intestinal microbiota influence chronic inflammation and cancer?
pb1 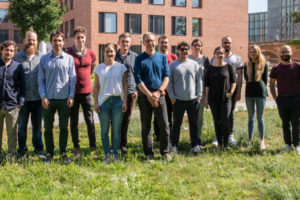 Development and function of the innate immune system
pb1 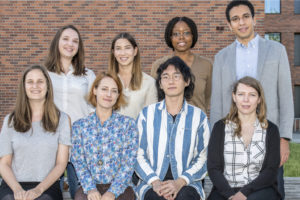 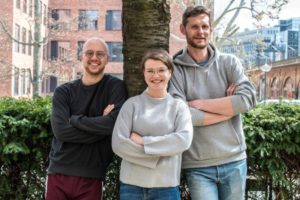 Significance of immune system, cytokines and microbiota interplay for the development of chronic inflammation
All Research Groups on the topic

Tracking immunity to the novel coronavirus

Rheumatism - a disease with many faces

Rheumatic disease in children and adolescents

The healthcare system in focus

This website uses cookies to enhance your user experience and to analyze user behavior in pseudonymous form. Further information as well as the possibility of withdrawal can be found in our privacy policy.
Accept CookiesDenyImpressum
Cookiezustimmung widerrufen